Before bankruptcy: Don't pay off the car!

Posted by Robert Weed / in Before Bankruptcy / 174 comments

“In bankruptcy, everything is upside down.  Bad is good; good is bad.”  I tell people that all the time. What does that mean?

For the bankruptcy court to approve your bankruptcy, we have to show why you can’t afford to pay.  It’s good for your financial situation to be bad. Things you do to cut expenses to keep paying your debts–they usually come back to bite you.  It’s bad to be good.

Early January 2011, the Supreme Court, in a decision called Ransom, added keeping your junker car to the list of things that make it harder to get your bankruptcy approved.

I want to be really clear on what this means to people like you.  Suppose you could have traded in your old car two years ago on a new one.  But you knew you couldn’t afford the car payment and still pay your credit cards.  So, you kept the old car, and kept trying to pay your credit cards.   According to the Supreme Court, that can make you a bankruptcy abuser.   Good is bad.

If you got that new car–and then realized you couldn’t afford the credit card bills–the Supreme Court makes it much easier to get your bankruptcy approved.  Bad is good. Still driving that old car while you try to pay your debts? The Supreme Court says that makes you a bankruptcy abuser.

The Supreme Court decision explains the car ownership expense in the bankruptcy means test.   In the budget you were assigned by Congress in 2005, you are allowed to claim $496 for your car payment–regardless of what the payment is.    You get twice that for two or more cars.

Most judges agreed that you got that $496 even if the car was paid for.  Their theory was even if you didn’t have a payment today you would need one sooner or later–and the means test is about whether the court will make you keep paying for five more years. (Also the IRS  standards referred to in the law say One Car and Two Cars.  Not One Payment and Two Payments.)

The Supremes disagreed.  You get the $496 as long as there’s even one payment left, but if it’s paid for, you don’t get it. That can make a big difference to a lot of people–having to keep paying the credit cards $496 a month for five more years.  That’s twenty nine thousand dollars!

OK.  So if you are in financial trouble, you now know to come to see me before the car is paid for.  And we’ll file your bankruptcy in a hurry.  That’s easy.

But suppose the car is already paid for.  Now what? That brings is to another Supreme Court decision, called Milavetz v United States.

Congress in 2005, when they wrote this complicated means test into the law,  also made it illegal for me to “advise” you to incur more debt in “contemplation of filing a bankruptcy case.”  Since lawyers are supposed to tell the truth to their clients, the Supremes gave me some wiggle room on that.

Some wiggle room.  I’m allowed to “talk fully and candidly” about incurring more debt.  I’m not allowed to “advise” you to abuse the bankruptcy system. But we can talk about the “legal consequences” of different courses of action.   So?

I am allowed to tell you it will be three years after bankruptcy before you can get a car loan at a good interest rate.  If your credit is still good now, and you’ll need a car soon, then I can advise you that now would be a good time.   I’m allowed to “advise” that, because you’re not incurring new debt “in contemplation of filing bankruptcy.”  You’re incurring new debt “in contemplation of” needing a car at a good interest rate.

But suppose your credit is bad already, and your junker car won’t get you through five years.   Am I allowed to tell you that you’re looking at a five year payment plan, driving around for five more years in that junker, unless you finance a car now?  Am I allowed to “talk fully and candidly” with you that?

I never advise anyone to get a car loan when they have bad credit–unless there’s no other way at all to get to work.  But, to be fully candid, I have to talk to you about the “consequences.”

Of the two choices, getting the car is better for your credit.  Getting the car means you might be able to get a mortgage loan in less than three years.  Otherwise, you’re talking seven years.

“Candidly,” I have to tell you that you can figure that out for yourself.

Maybe I should stop here.

Some lawyers have told me privately that they think their clients should get a title loan on that older car.

I’d never “advise” getting a title loan.  Title loans mean you get $3000 on your car, and you have to pay $500 per month FOREVER.  That’s never a good idea.    But if we discuss it fully, suppose you could use your tax refund to pay off the title loan after one month.  Then it costs you $500 to borrow $3000 for just one month.  And as a bonus, you avoid having to pay the bankruptcy court for five years.

Any better ideas?  Suppose the junker really needs work, which you can’t afford.  And mom has offered to let you borrow her car for a few months, for free.

Free is usually good.  But, talking candidly now, if you offered to lease mom’s car for six months, rather than borrow it, now we can get your bankruptcy approved.  I’m allowed to tell you that in a “robust discussion.”  But I have no advice on the matter.

Just before the Milavetz decision came down, I had some clients ask me if they were “allowed” to buy a car before filing bankruptcy.  I told them I couldn’t tell them to do it, but I could tell them they were allowed to do it. The enforcement people from the Justice Department asked some very pointed questions about that.   With help of the Supreme Court, they finally agreed I was allowed to tell my clients they were allowed to finance a car.

If you do it, it’s because you decided.

Remember, you didn’t read it here.

Before bankruptcy, I like to meet with you and go over your credit report.    The credit report I like best is at experian.com/reportaccess.

One reason I like that report is big print.  (I’m 62 and I’ve worn glasses since I was 8.)  But the other reason is that Experian report shows the balance history of your credit cards.

(I hate them for another reason, too.  I don’t think something is “free” if you have to sign up for an annual subscription to get it.)

Knowing your balance history is important in the timing of your bankruptcy.

The bankruptcy code, at 11 USC 523(a), provides that the bank can object to discharging their debt if you made a “false representation.”

The “false representation” they like to bring up is the small print when you sign a charge slip.  The small print that says something like  “I will pay according to my credit card agreement.”

If you haven’t made six payments since your last big charge, there’s a good chance the bank will object to your bankruptcy.  They say your claimed you would pay when you know you couldn’t.  That’s the “false representation.”

If they file objections, we can fight back and win.  Especially if there was a change in your situation–you lost your job, you got sick, your husband split.  If you have something like that, the judge will probably side with you.

But unless there’s something specific you can point to, it’s a good idea to make six payments after your last big charge, before filing bankruptcy.   A credit report with your balance history helps me see when the last big charge was.   That helps us plan a bankruptcy that gets approved without objections.

PS.  In the bankruptcy court here, I see more objections filed by Chase Bank credit cards, than any of the others. Leslie beats a warrant in debt

Posted by Robert Weed / in Before Bankruptcy, warrant in debt / 46 comments

How Leslie Beat a Warrant In Debt

Leslie, not her real name, came to see me two months ago about filing for bankruptcy.

It was clear, after we looked at her forms and talked it over, bankruptcy would work for her.  It would take a couple months, though, to gather up everything we needed for her bankruptcy to go right through.

But, she had a warrant in debt scheduled for the following week.   If she just ignored it, she was likely to get garnished.   (We didn’t want that.)  So, I told her to go to court, and follow the instructions at my warrant in debt blog.

Leslie went to the courthouse (in the picture) on the “return date” and asked the judge for a trial.  In Virginia, the trial is usually set six or eight weeks later–depending on the county and the judge. 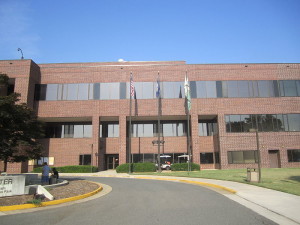 Leslie’s warrant in debt hearing was in the Prince William County Courthouse.

Leslie was in luck–because her creditor was Asset Acceptance, a debt buyer.  Debt buyers often cannot prove what the debt is about or what the amount of the debt really is.   Asset Acceptance proof must have been really weak in Leslie’s case, because they filed nothing at all as their bill of particulars.

(The statute of limitations sets a deadline to sue you after you’ve stopped paying debt.  Wait too long, and the creditor is out of luck.)

We expected that would mean Leslie would win at the trial, but she won sooner.

Asset Acceptance wrote to the judge and said they were dropping the warrant in debt case.  Under Virginia law, that’s called a non suit.

Is Leslie home free?  Not quite.  In Virginia law–not like most states–after a non suit, the creditor could come back and try again.  But, we’ll have the bankruptcy filed before that.   (This debt with Asset Acceptance was only a small part of her problem.)

Because of her good work, she now has plenty of time to get ready to file for bankruptcy, without having to worry about getting garnished.