Linda Pays through Beyond Finance and Gets Garnished

Linda Pays Mariner $6113 through Beyond Finance. Then She Gets Garnished

Linda Cash (not her real name) wanted to clear her debts without filing bankruptcy. As an alternative to bankruptcy, she signed up for Beyond Finance.

Linda needed Beyond Finance to help her with Mariner. (She originally borrowed $5383, got behind, and now owed Mariner $6113.65.)

Beyond contacted Mariner and then told Linda “Congratulations–we’ve settled Mariner for $6113.65.”  In 29 installments, they told her.

Bad surprise. Mariner wanted $6113.65 at 36% interest. Mariner had agreed to $213 a month until paid in full. It would take 66 months–not the 29 Beyond told her–to pay Mariner with interest.

Linda complained to Beyond. Beyond didn’t explain.

She argued with Mariner. Mariner garnished her. That’s when Linda called me.

Bankruptcy Would Have Been Better

Chapter 13 would have done what Linda wanted.

If Linda had signed up for chapter 13, the bankruptcy court would have made Mariner accepts payments at no interest. (The Chapter 13 trustee does charge a handling fee on each payment–so it would have taken 32 payments at $213 to pay off Mariner. Not the 29 payments Beyond promised her.  But way better than the 66 payment settlement from Mariner.)

Chapter 7 is Even Better

As a single person in Virginia making less than $67,815, Linda is eligible to file Chapter 7 bankruptcy. Chapter 7 discharges–clears–her finance company loans, like the one she had with Mariner. If she had filed Chapter 7 in the spring of 2019, instead of going to Beyond, she’d be back to good credit today.  She could get a car loan at a good rate, or even qualify for a mortgage and buy a house.

And she would have saved the $5964 she paid through Beyond to Mariner. 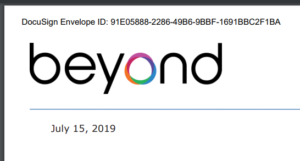 Linda thought Beyond Finance had settled her debts with Mariner with 29 payments of $213.00. But Mariner had only agreed to 66 payments of $213.  After the 29th payment, she stopped–and got garnished.

I don’t think Beyond was intentionally tricking Linda–they just screwed up. But I do say these debt settlement outfits are rarely a good idea.

Why Not Debt Settlement? Actually They Warn You

Here’s what it says in small print on the Beyond website.  “The use of debt consolidation services will likely adversely affect your credit. You may be subject to collections or lawsuits by creditors or collectors.”  In other words, if you sign up for their program, you will wreck your credit; then expect to get sued.  Probably not the best idea.

For people who really, really want to pay their debts, and need only a little help, I often recommend debt managment programs. They can usually get each payment down a little off the regular minimum monthly and still pay everybody off in five years.  Debt management plans have to be licensed in most states, including Virginia.

Most legit debt managements programs (they are sometimes called credit counselling) won’t BS you. If they can’t make your budget work, they will tell you so, and suggest bankruptcy.

Other alternatives to bankruptcy

For other alternatives to bankruptcy, you can disappear. Or just don’t pay.