Under Virginia law, the bankruptcy court cannot take away a personal injury claim.  Injured in a car accident? Hurt in the hospital? Anyone in Virginia can file bankruptcy and still keep those claims.

Steven Ramsdell, one of the top bankruptcy lawyers here, is desperately trying to save a possible million dollar injury claim involving a Mr. Barnes, who “forgot” to tell the bankruptcy court about his personal injury.

Barnes filed bankruptcy in June 2020 and it was discharged in October 2020.  Two months later, Barnes sued a Loudoun County doctor for a million dollars, claiming a wrong prescription caused permanent damage to his liver.  In May 2021, the Loudoun County Circuit Court court threw Barnes put of court.

That’s How To Lose Your Personal Injury Claims In Bankruptcy

Here’s what happens when someone forgets to tell the bankruptcy court about your car accident or any other personal injury. Injured in a car accident? Hurt in the hospital? You can file bankruptcy and still keep your rights. As long as you remember to tell the bankruptcy court.

Those rights are forfeit. Two ways.

Now, Barnes will ask the bankruptcy court to cut him some slack.  If the bankruptcy judge finds Barnes “forgot” because of “excusable neglect,” he may get a second chance to claim and protect his rights.

Supposed a mortgage company overcharged someone and they didn’t know they were owed a refund. Forgetting to tell the bankruptcy court about that would easily be excusable neglect.

Barnes, on the other hand, sued his doctor less than three months after his bankruptcy was over.  Does that look like “excusable neglect.”  Or does it look like lying?

Imagine this in the state court.  “You are telling this court, Mr. Barnes, that you are in constant pain? But you didn’t mention that pain when you met with your bankruptcy lawyer? Why should any jury believe you?”

Today, we don’t know how the Barnes case will turn out. Last week, the bankruptcy judge agreed he’d at least give Barnes a chance to explain his side.

PS  I should add that Steven Ramsdell was NOT the lawyer who first handled Barnes bankruptcy case. Barnes, of course, may be tempted to blame the problem on the first lawyer who handled his bankruptcy.  That first lawyer knew Barnes hadn’t worked for five months. Was that because of this injury? Should the bankruptcy lawyer have asked?

A lot of people will be sweating when the bankruptcy judge decides on “excusable neglect.” Lawyers are appointed Chapter 7 trustees as a part-time assignment.  He’s a partner in the law firm of Odin Feldman & Pittleman PC, located in Reston. King and is head of that firm’s bankruptcy and creditors rights practice.

When he was younger, he was a NCAA Football official.  During the 2012 NFL referee strike/lockout, he was a replacement referee in one game and umpire in three.

We paid a $338.00 filing fee when we filed your bankruptcy case. Sixty dollars of that went to Trustee King. For each case, including yours, he is paid an additional $60.00 that is indirectly collected from Chapter 11 bankruptcies. (Congress thinks the bankruptcy courts to raise enough in fees to pay for themselves.  No other part of the federal court system does that.) 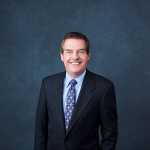 Donald King is a stickler on paperwork and deadlines.  We are required to send in bank statements for each of your accounts one week before your hearing is scheduled.  If we are a couple days late on that one week requirement, Trustee Donald King will most likely make you, and me, come back two weeks later. We stopped in-office consultations with the March 2020 pandemic lock down.  (I first heard of Zoom when my church started using it. We’re a small congregation and can see everybody on screen.)

First, it saves travel time.  The pandemic is still raging.  But the traffic in Northern Virginia is as bad as it’s ever been. It takes too long to get anywhere.

Second, people are more comfortable.  Especially on the initial contact–what I call the Quick Call–it works out well. I’m at my own computer, where I can access all my info. And you are at home–or wherever–more comfortable and maybe more open than you’d be in an unfamiliar office.

I didn’t expect that. But I often feel we cover more ground and clear up more concerns with a virtual consultation.

I’m at my own computer, where I can access my info. And you are at home more relaxed than you’d be at a meeting in an unfamiliar office.

Third, safety is most important. Sitting across the desk with the same person for an hour, passing papers back and forth, that’s a risk we don’t need to take.

Hearings at the bankruptcy courts are virtual, zoom and telephonic–until 60 days after the President declares an end to the emergency.  We’ll keep Zooming at least through the end of 2021.

Documents can be a problem.

After our quick call, I invite you to fill in my Be Happy form.  That’s here on my website.  Then we’ll send you a password and links to upload the required documents. Transferring documents can be the hardest part of the virtual consultation.

You likely already have some of the documents in pdf.  You can take a photo on your phone for the required ID.  Having access to a scanner can be helpful.  Usually we can find a convenient solution.